The wider use on UK construction sites of plug-in 400V and 230V equipment, working alongside plug-in 110V power tools and 110V temporary lighting, has seen an increasing demand for Site Power Clusters, which provide all three voltages from a single TP&N supply.

Fitted to the front of the enclosure and fed from the transformer secondary is an array of 110V supplies, including socket outlets to supply portable power tools and time clock controlled hard wired lighting outlets.

The 16A and 32A 110V sockets are individually protected by double-pole MCBs and they are also group protected by a 300mA 4P 110V RCCB, which ensures the 5 second disconnection time for 110V circuits is met. Without the incorporation of a medium sensitivity RCD to protect 110V sockets, there is a significant risk that line to earth faults will not be cleared, with the consequent risk of fire.

The assembly is also fitted with two 16A, hard wired, 4 core lighting circuits. These 4 way lighting connection points are individually protected by 16A, double-pole, 30mA, 110V RCBOs with the switched live pole of each connection point controlled by a 110V time clock / contactor. The time clock has near field communication, and the settings can be downloaded from an easy to use phone App. An override switch is also provided, allowing the lights to be switched ON at any time. The contactor has normally closed contacts, so that if the control circuit MCB operates, the system fails safe i.e. the lights will remain permanently ON. The lighting outlets supply our Flori-67/4P 4 core plug-in lighting system, which allows an unswitched supply to be provided for emergency lights, enabling all lights to be turned OFF without discharging the integral batteries within emergency fittings.

Site Power Clusters with other combinations of mains and RLV sockets can be provided. The incorporation of hard wired lighting circuits is optional. They can be 3 core and do not need to be controlled by integral time clocks and contactors.

If you have a requirement for a Site Power Cluster, please contact the Blakley projects team, who will be pleased to be of service. 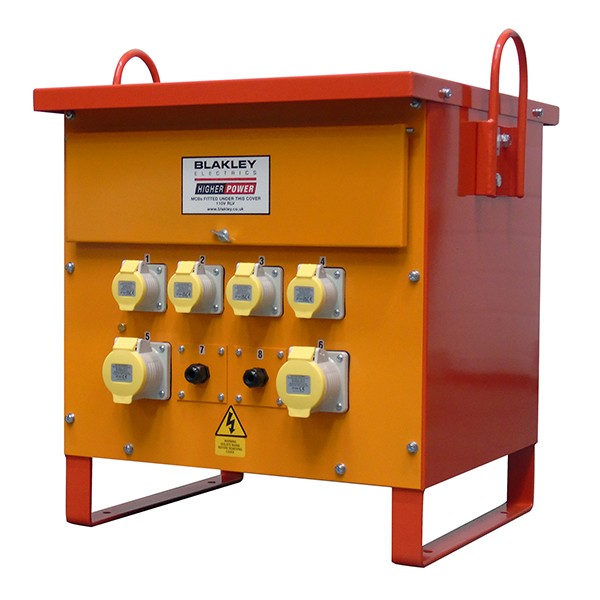 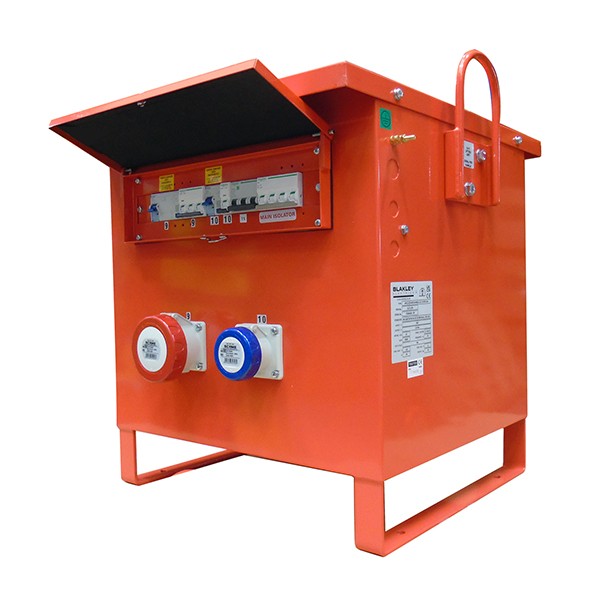 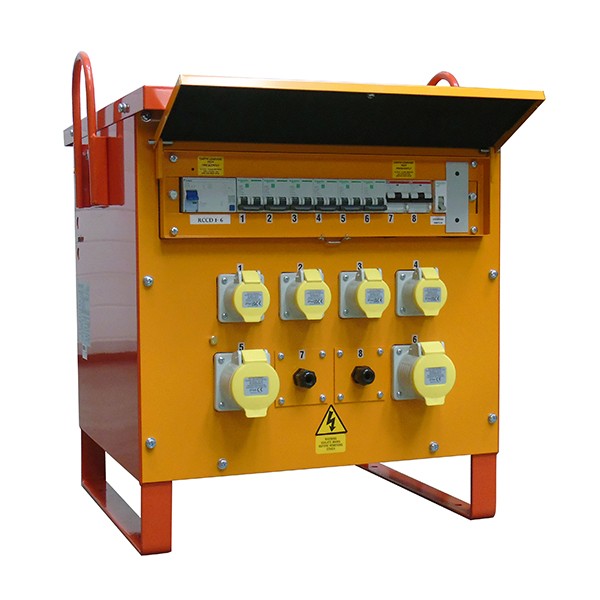 The wider use on UK construction sites of plug-in 400V and 230V equipment, working alongside plug-in 110V p...

Generator Connection Unit up to...

The Blakley Projects Team were recently involved in developing a Generator Connection Unit (GCU) for a majo...

Towards the end of 2020, as normal business began to return, the Blakley Projects Team were involved in dev...

As part of the enabling works on one of the UK's major construction projects, the Blakley team have supplie...

BS 7375 is the British Standard covering the Distribution of Electricity on Construction and Demolition Sit...

Since the start of 2021 the Blakley team has been busy designing and manufacturing bespoke distribution equ...

At Blakley Electrics, site transformers and 110V site lighting are both key parts of our range and occasion...

On fast track construction projects there is an increasing awareness of (i) the delays and disruption that ...

The publication of the 18th Edition IET Wiring Regulations has seen an expansion of section 531: Devices fo...

The Blakley team have recently been involved in a demanding contract for Mains Distribution Assemblies (MDA...

The Blakley Projects team has recently been involved with a scheme to provide temporary power and lighting ...

We offer a comprehensive range of 110V LED lighting products, which include fixed and portable floodlights,...

Are you ready to discover your high performance power and lighting solutions?

Contact us
We use cookies on our website to give you the most relevant experience by remembering your preferences and repeat visits. By clicking “Accept All”, you consent to the use of ALL the cookies. However, you may visit "Cookie Settings" to provide a controlled consent.
Cookie SettingsAccept All
Manage consent

This website uses cookies to improve your experience while you navigate through the website. Out of these, the cookies that are categorized as necessary are stored on your browser as they are essential for the working of basic functionalities of the website. We also use third-party cookies that help us analyze and understand how you use this website. These cookies will be stored in your browser only with your consent. You also have the option to opt-out of these cookies. But opting out of some of these cookies may affect your browsing experience.
Necessary Always Enabled
Necessary cookies are absolutely essential for the website to function properly. These cookies ensure basic functionalities and security features of the website, anonymously.
Functional
Functional cookies help to perform certain functionalities like sharing the content of the website on social media platforms, collect feedbacks, and other third-party features.
Performance
Performance cookies are used to understand and analyze the key performance indexes of the website which helps in delivering a better user experience for the visitors.
Analytics
Analytical cookies are used to understand how visitors interact with the website. These cookies help provide information on metrics the number of visitors, bounce rate, traffic source, etc.
Advertisement
Advertisement cookies are used to provide visitors with relevant ads and marketing campaigns. These cookies track visitors across websites and collect information to provide customized ads.
Others
Other uncategorized cookies are those that are being analyzed and have not been classified into a category as yet.
SAVE & ACCEPT
Go to Top